Do you care about each other in your work environment? 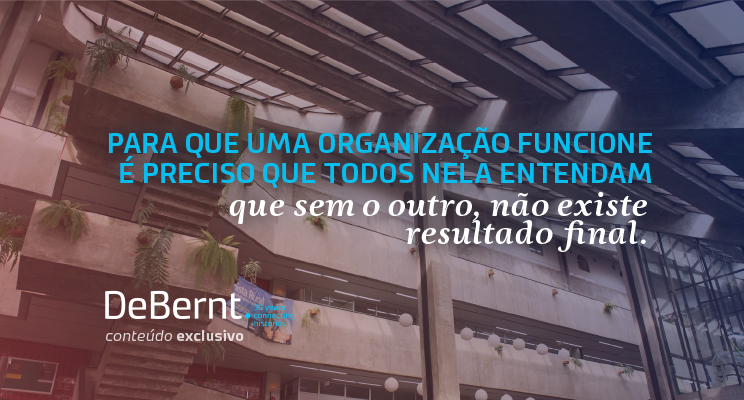 Working in a team is not an easy task and it is one of the skills that, although professionals easily say they have, in practice, the reality is very different. For an organization to work well and give robust results, it is not only necessary that the atmosphere among the team is pleasant, but mainly that employees understand that without the other there is no final result. It is as if we are talking about a gear in the engine that if one of the parts fails, the car will not be able to play its role.

It is very common for managers to have to resolve conflicts between subordinates because the areas do not talk to each other and do not work together, with cooperation. It is common to hear the phrase “I did my part and the delivery was delayed because so-and-so didn't do his” as if this were a plausible argument.

More and more companies are having to study ways to transmit interdependence as a foundation that must be perpetuated and put into practice. Now, if an employee does not do his part, it will obviously be bad for him, but it will also be bad for the company as a whole, which will delay the delivery of a service and/or product, which could compromise your billing and, consequently, the future of the team. Therefore, thinking only about your tasks and your area is an outdated concept that no longer fits the current model that organizations need to follow.

If the interdependence between areas is a reality and for it to work teamwork is essential, then why is there so much noise between areas/teams/people? Why is so much invested in training in this area and yet excellence is not achieved? In part, due to some issues related to the company, such as a lean structure due to reduced costs. But most of the time, the main reasons relate to flaws in human behavior.

For example, people tend to communicate very poorly in the corporate environment. Generally, no one cares if the other understood the message that was given, what was asked and what is expected.

Feedback that should be received with enthusiasm, especially if it is constructive, since it is an opportunity for improvement, is not. Most professionals do not like to receive criticism, to be contradicted and assume the posture of victim.

Another common problem in teamwork is letting interests outside the work objective get in the way of deliveries. Of course, the idea is that all collaborators contribute to each other, but one cannot prioritize the other without their part being done.

Finally, at the end of a project, the result should not be measured individually, but the team as a whole. This is an important way of showing employees that the final reward (whether material or not) will only come if everyone's work is well done and integrated. Therefore, there is no point in doing only one's own part and not looking if there is someone in need of support.

To solve the chasm that exists between the ideal scenario within a company and reality, there is a need to change behavior and this requires time and determination. Leadership must be attentive and constantly vigilant. In addition, they have to practice the company's values ​​on a day-to-day basis and not just keep them in mind. The manager sets an example for his subordinates. If he demonstrates the need for teamwork and how it contributes positively to the development of the company's business, his employees will certainly tend to follow in his footsteps.

Romulo Machado is South Regional Director, with over 25 years of professional experience in national and multinational retail, technology & telecommunications and consulting companies.

HR Consultant UK can help if you have any questions about Do you care about each other in your work environment?
. Our HR consultant in London can assist you if you live in London. Suppose you live further afield thats not an issue! Visit our HR Consultants Near Me page to find the best consultancy nearest to you.
See you next time!