Eisenhower’s matrix is ​​intended to organize your routine, learning to prioritize tasks according to their degree of importance and urgency from a quadrant fragmented into two axes (vertical and horizontal). In each of them, you will:

Leadership that does not keep up with fast changes – social and technological – is bound to stagnate.

Even worse: you risk seeing an avalanche of demands damage your productivity, and increase your stress level.

Notice, here, the interesting contrast that we will present, throughout this article, so that leaders can make the right decisions, with agility and without losing productivity: the Eisenhower matrix.

It is a method with more than 50 years of market application. And, before you condemn us for highlighting such an old tool, and in such modern times, give us a vote of confidence.

Find out how this model can be the differential to organize the day to day, prioritizing what is relevant, urgent and priority – without drowning in the turbulent routine!

Let’s start with the basics: Dwight Eisenhower was one of the most popular people in the world – and not just because he was the 34th president of the United States (between 1953 and 1961).

In addition to the position at the head of the powerful American nation, he was well known for having the productivity of his routine in the palm of his hand.

The secret behind this goes by the name of Eisenhower matrix. After all, the then president of the United States already had a history of discipline and organization.

Prior to the chief position, he was a general in the army, served throughout World War II and also commanded educational institutions such as Columbia University.

It is no wonder, therefore, that such versatility and dedication needed a tool capable of assisting you in important everyday decision-making.

This is how Eisenhower’s matrix gained strength in its routine, and a global appeal to generate productivity, focus and discipline in the organization of tasks.

What is the Eisenhower matrix?

If you don’t know where to start your work each morning, perhaps the Eisenhower matrix will illuminate your ideas.

Its implementation is very simple, and does not involve any effort to put it into practice. Just the investment of a few minutes to outline your activities.

Using the Eisenhower matrix, you need to assemble four quadrants, divided into two axes. In other words: a larger square, fragmented into a horizontal and a vertical line, as shown in the illustration below: 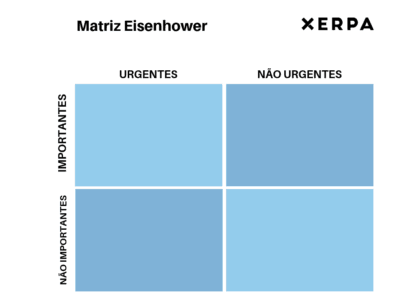 So, you have your Eisenhower matrix drawn. Now it’s time to put it to use!

How does the Eisenhower matrix work?

As we said, the Eisenhower matrix has as its main purpose the organization of its routine, learning to prioritize tasks according to their degree of importance and urgency.

Following the outline of the figure highlighted above, you will align your activities as follows:

Did you see how this organization can help you visualize your routine without, therefore, disturbing the priority and urgency of each of your activities?

Here, it is appropriate to paraphrase the 34th American president regarding his productivity:

How to organize the Eisenhower matrix?

To organize the structure of your Eisenhower matrix, start with the base that we highlighted earlier.

Then, take a few minutes to identify which pending tasks fit within the respective quadrants on your table.

It is important that you make a habit of filling out the Eisenhower matrix at the beginning of the week or at the end of a working day.

In this way, the routine does not catch you from unforeseen events, as you already know what is scheduled for the next day – or week -.

However, it is worth following some specific tips so as not to get in the way when planning it:

It is a good idea to dedicate a time interval between tasks to carry out the parallel activities and allow for distractions. This helps to catch your breath to carry on with your work.

What are the obstacles to decision making?

Now that you have your version of the Eisenhower matrix in hand, let’s take a look at the psychological side of the problems that interfere with our decision making.

Often, we are overcome with pressure, stress and a high emotional burden, which clouds the reasoning in search of an impartial logical decision.

Hence, the importance in what we said about having a well-defined Eisenhower matrix for professional and private issues.

Start respecting your limits – physical and psychological – and have the matrix always at hand to organize yourself and prevent the accumulation of activities from stealing your entire disposition and generating an overload of work.

So, do you think that the Eisenhower Matrix will help you plan your daily life with more discipline, focus and productivity?

So, share it on your social networks and take the time to tag your co-workers who will also benefit from using the Eisenhower matrix!

HR Consultant UK can help if you have any questions about Eisenhower Matrix: learn to make more assertive decisions
. Our HR consultant in London can assist you if you live in London. Suppose you live further afield thats not an issue! Visit our HR Consultants Near Me page to find the best consultancy nearest to you.
See you next time!

How to choose a management platform for your company?

Investing in an HR management platform is essential to keep a company competitive in the current scenario. This type of software is extremely useful for

Learn how to apply an organizational climate survey

The company depends directly on the employee satisfaction to succeed. After all, unmotivated employees produce less and with poor quality. When it comes to customer

How to save fuel: 7 tips to reduce expenses

Everyone knows that saving is essential for a healthy financial life. For those who travel by car, it is essential to keep an eye on

Performance management system: what is it and how to apply it in the company?

Companies are increasingly looking to improve their results, increase profits and make their employees produce efficiently. One of the strategies for this is the implementation

How to do a new employee integration survey?

The onboarding process is a high value strategy for the organization. Through it, its professionals are quickly familiarized with the entire structure and flow of

What is the acceptable absenteeism rate in companies?

In excess, the absences of your collaborators burden the other members of their respective teams and reduce productive capacity from the company. Consequently, profits are

Financial stress: the evil that may be affecting your team’s performance

At money worries they are one of the great motivations for problems like stress, depression and anxiety. This situation has a name: it is the

Career in Y: understand what it is and its possibilities for professionals

When starting a professional career, most people imagine that in order to achieve a successful position or a satisfactory salary, they will need to occupy

How does the employee health plan work? Why hire?

O health plan has always been seen as a great attraction for many professionals. Now, with the recent global health crisis caused by the Covid-19

Get local HR support in the UK and USA?

So that we can get you through to the right HR Consultant please let us know what is your location.