Talent gap analysis: Set the team for a successful scaling

This post is about how to ensure that your company has the right skills and talents, as well as how to apply a talent gap analysis to uncover, plan and hire the right people. We will take as our starting point a concrete scaleup case that Talents Unlimited is working on right now. Casen is a fast-growing European company that, since they started 4 years ago, has grown to be almost 125 men in 7 different countries. They are now in a phase where they need to go from a start-up structure to a scale-up structure, so there needs to be a change in their strategy. Therefore, they also face a considerable recruitment challenge as they are going to find people who need to have some other competencies. However, they also do not want to lose the entrepreneurial spirit that makes the company something special.

NB: Talent is a difficult size to work with. The following is based on the Talent Test, TT38, which Talents Unlimited has developed, but you can of course use other methods. TT38 conceptualizes talents in the form of 38 cognition patterns, whose relative strength shows where the individual has the greatest potential.

What is a talent gap analysis?

A talent gap analysis covers a strategic approach to mapping and planning the company's human resources. You could say that the formal strategy is about: “Where are we going? What does it take? ” and “who is it for? And how do we make sure he / she is ready when needed? ”. 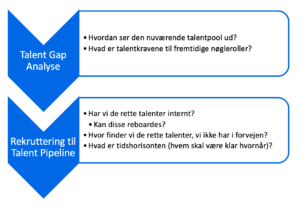 There are two elements in this phase: the current talent pool, and the talent requirements for the future based on the formal strategy the company has laid. These are elaborated in the following.

In the case company, the following talents score the highest on average in the management team:

This means that there is a full blast, with the gaze fixed firmly on the goal, the plans and the visions. At the bottom we find the following talents:

This means that even though they are good for planning, no one has the eye to put processes in order and make sure that things are done down to the smallest detail. We can also see that the gaze only points forward and not backward, so perhaps they are making more mistakes than necessary because they had not understood why a given situation had arisen.

1.2 Talent requirements for the key roles of the future

The next step is to draw a picture of what the talent situation should look like in 3 years. The starting point is, of course, the formal strategy, but it is supplemented with input in relation to which talents are needed in special key positions. This means that work must be done on questions concerning: What key positions must be filled in order for us to reach the goal? What talents are particularly important to be able to excel in the role?

In this specific case, the formal plan is to extend to 15 countries. The key positions in this expansion are the nationally anchored franchisees in the new countries and the HQ-anchored role as a start-up assistant. Based on the existing international departments and an analysis of the functions, we found that the following talents are crucial for the franchisee team's future success when expanding to new countries:

In this case business, most departments are started by 2-3 person teams. So there are more people to distribute the talents on.

For the HR-anchored role – which is to assist the franchisees in the start-up process – the requirements were:

This franchise kickstarter role is intended as a catalyst and knowledge carrier that can kickstart the start-ups and leave the process to the locals after a period of 3-6 months.

Based on its Talent Gap Analysis, you are ready to make long-term recruitments. A really good place to start this process is to look inward – do we already have those that are needed in advance? If you have clarified the talent requirements, this process is relatively straightforward. There are many benefits to looking internally first. For example, an internal person will know your company and have an established network that enables him to solve tasks faster and better than a new employee could at the same time. In addition, outside employees do not always reach the same level, although they often demand more in salary.

In the case business, they already had someone in-house in charge of the franchise kickstarter role. Let's call her Maria. Going forward, Maria's role will be to be part of the start-up phase of departments in new countries, together with the locals, who will drive it forward in the long term. At the same time, the case company recognized that Maria could become a scarce resource and that the company's expansion strategy could fall to the ground quite quickly if she left the company, became seriously ill or was prevented from solving the task at all. Therefore, another internal person was identified with the same 3 talents. This person, Edgar, is younger and has been in the business for a short time, but it would make sense to drive him into the position of becoming the next Maria over the next few years. Additionally, it makes sense to identify the next Edgar so that there is always a talent ready in the pipeline. This could, for example, be done through a targeted effort in higher education, for example participation in case competitions, assignment collaborations, presentations, etc. Once you have established contact with the potential future candidates, their talents are analyzed so you have an overview of where they can fit into the business. 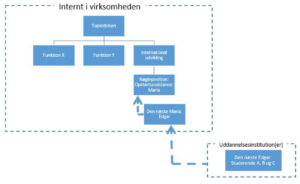 The other critical element in the company's growth strategy is to get the right “founder team” in the new countries, so that all the necessary talents are present. If you have done your Talent Gap Analysis properly, part of the foundation is in place; however, it requires you to be able to identify and attract the right talents.

Had there been a more classic setup, one would put together a job posting based on the described talents and screen all relevant applicants hard on them. For the case company, the process is a little different and network-based, but talent is still screened hard. Recruiting on the basis of talent has the clear advantage that it minimizes bias, be it gender, age, ethnicity or anything else.

During a recruitment process, it can generally be recommended to include a so-called “Realistic Job Preview”, which means giving a potential candidate a realistic and thus also critical insight into what the job is about and what stage the company is at. By doing so, you prevent the candidate from joining the job with unrealistically high expectations, which could potentially be the cause of an early dismissal. In this way, you start an active poll of expectations about the content of the job even before you start a formal collaboration.

With the above, we have tried to take recruitment into the strategic arena and lift it up to a long-term level based on thorough analysis. It is precisely the analysis and the future perspective that ensures that recruitment does not remain a reactive process, but that you ensure that you always have a talent pipeline ready so that your company can realize its strategy with the right people in the right positions.

After all, how to measure the ROI of HR actions?

Within organizations, it is common that some sectors, such as Human Resources, are not yet seen as objective and strategic. This is because they do

While the crisis has contributed to increasing the expectations of young people in relation to work (work/personal life balance, telecommuting, and salaries), it has not

Summer is coming and the academic year is coming to an end. The opportunity for you to get a little job for a few months

What is Outplacement and why is it important for senior positions?

The moment of dismissal is always very delicate, as this is a process that emotionally affects both the person who is fired and the person

“How the CEO of a TV start-up changed my life”

“Without the baccalaureate in my pocket, I had made my way in the hotel industry. First team member, then baggage handler, and receptionist. I have

The book and also an American film Moneyball (The Man Who Changed the Game, in the UK) portrays the story of a baseball team that,

Last year, the Universum ranking was marked by a year of health crisis and confinements. Job security was the primary objective of students from Grandes

Why is self-management for senior positions essential?

self-management. In recent years, this word has gained strength in the business vocabulary and has become an essential feature for those professionals who occupy high

Take back power over your career in 6 steps

Do you feel that your professional life is slipping away from you? This is the case for 9 out of 10 English people, according to

“Web3 profiles don’t really exist”. Antoine Scalia, boss of Cryptio, would however dream of recruiting them. With his company, he does the accounting on behalf